Over the last few years London Luton Airport Limited (LLAL) have submitted a number of proposals to significantly and aggressively expand the airport. Aviation is the fastest growing producer of greenhouse gasses. North Hertfordshire District Council, the British Parliament, leading scientists and environmental organisations worldwide agree that we live in a time of a climate emergency. We only have 10 years to put the brakes on the emissions we produce and create a more sustainable future. An expansion of an airport is the very opposite of what we need to do to tackle growing emissions.

Find more information on the proposals, the potential impacts, our response to the suggested benefits and our actions against it below:

In January 2021 Luton Airport submitted a planning application proposing increasing their annual passenger numbers from 18 million to 19 million, with requests to amend noise restrictions in both daytime and nighttime to achieve this. As with previous applications, it has drawn strenuous opposition from residents and local environmental groups. The application is currently awaiting a decision (as of March 2021).

The proposals released in Autumn 2019 hoped to nearly double the airport in size and capacity to cater for an extra 14 million passengers per year. Apart from the already suggested DART line - a light railway line, which would link Luton Station with the airport - the plans include a new terminal building, more parking spaces, business facilities, additional access roads, and other additional airport facilities. The airport would nearly double in size, swallowing up land that is currently home to the award winning and much loved Wigmore Park.

LLAL ran a consultation which ended on 16th December 2019. Alongside residents, other environmental groups and some MPs, we had grave concerns about the expansion plans:

• Impact to Nature - The plans would use land from Wigmore Park with a new open space proposed in the Green Belt further east. Although the plans included conservation measures, it would mean destruction of a mature nature reserve, with great disruption to wildlife in the area and loss of mature trees and shrubs.

• More people affected by more noise - The extra air traffic would require the flight path to spread out which would affect more people more severely. The current flight path to the east goes straight over the villages of southern rural Hitchin and Stevenage. More aircraft using the single runway will put the airport at a greater risk of disruptions leaving planes queueing in the air space above us. An additional 200 households that would be affected significantly by increased noise disruption. Increasing number of planes would force planes to fly lower, further increasing the noise pollution.

• More people affected by air pollution -The 80% increase in flights would bring a significant increase in air pollution and affecting a greater area. With airplanes being forced to fly lower the emissions will remain closer to the ground, thus affecting the inhabitants underneath more intensely.

• Increased ground traffic (even with increased passengers coming by public transport - less than 16% at current) will mean busier roads. With congestion and air pollution already illegal and at breaking point at peak times this is an additional burden the towns in Hertfordshire cannot take.

• No true equitable economic benefits - The airport expansion is billed as offering economic growth to the region and an increase in jobs. However the money the council makes off the airport is bound for reinvestment into the airport - a vicious cycle of growth at the expense of quality of life. The estimated 4000 additional jobs will be created under the same conditions as they currently exist: zero hour contracts, in a toxic environment. 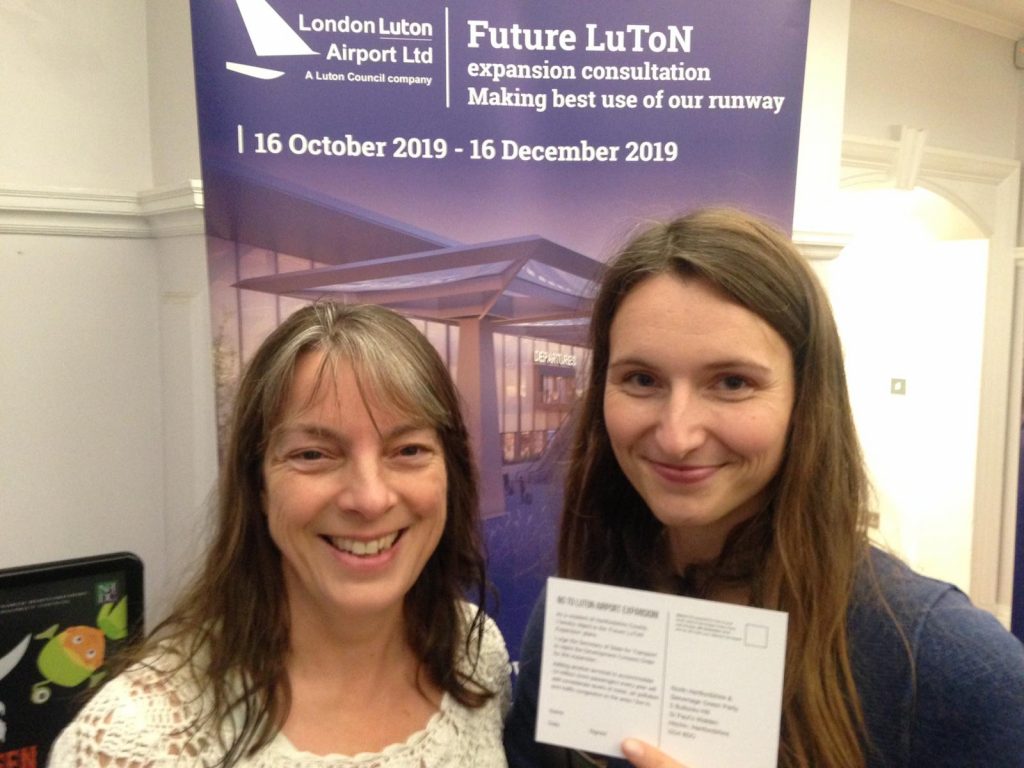 Our Activities To Oppose This:

• Green campaigners created postcards that give Hertfordshire residents the option to object to the expansion.

• We work with Luton and Hertfordshire councillors to promote alternative plans.

• Green campaigners have created an online petition against the expansion that reached more than 1.5k signatures.

• Greens collaborate with LADACAN, SLAE, XR and other organisations to tell the truth about the expansion.

• We have created guidance on how to use the consultation form to object to the expansion plans.

To get involved even further or if you have any questions, please get in touch with info@northherts.greenparty.co.uk

Other useful information and resources are available here:

Luton and District Association for the Control of AircraftNoise LADACAN