By DJN for the North Herts Green Party April 2019 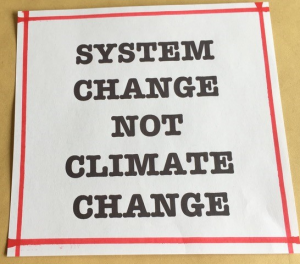 The earth has warmed 14 degrees C in the last 3 million years. What does this mean for us? Some of the effects are:

The effect of human activity is clear. The Green Party considers global warming to be a potentially devastating environmental (and societal) hazard for people now and in the future, and seeks immediate, and cooperative global agreement and action.

Modern humans only appeared about 200,000 years ago and industrialisation has only happened in the last 100 years or so. The rate of warming was low, about 0.000004 degrees a year, but recently the rate has accelerated to about .005 degrees a year, which is approximately 1000 times faster than the ice-age rate. The Earth has warmed by 0.19 degrees since 1978/9 (38 years).

The last few years have broken weather records, which have been monitoring conditions for the last couple of centuries. Last year the whole earth had warmed by 1.6 degrees C since the industrial age, higher than the target of 1.5 degrees set by the Paris conference in 2015.

Global warming happens when greenhouse gases such as carbon dioxide, water vapour, nitrous oxide, methane, particulates and chloro-fluoro-hydrocarbons prevent or slow natural planet cooling. These gases can be produced by industrial human activity such as burning fossil fuel such as gas and oil, and processes involved in intense livestock/meat. Livestock farming for meat and dairy have multiple harmful effects starting with “land-use change” – sacrifice of natural grassland or forest (for example the Amazon); the production of fertiliser for the growing of crops (such as pulses or maize) which are then fed to factory-farmed animals – not people. Industry and manufacturing also release enormous amounts of these and other gases, and our natural systems of cooling such as carbon sequestration in forests and peatlands is under direct attack and becoming less effective all the time as atmospheric temperatures rise.

The “Earth Summit” in Rio (1992) led to the establishment of UNFCCC (The UN Framework Convention on Climate Change) and IPCC (Intergovernmental Panel on Climate Change) that regularly publish up-to-date reports on various aspects of climate change such as “extreme risks and disasters” “CO2 capture and storage” “mitigation using renewable energy” and “regional vulnerability”. The Green Party actively supports the leading roles of these bodies (1). Good overall statements of issues and scientific and governmental consensus are reported with international work-party organisation.

However, the global environmental cooperation needed is happening far too slowly.

The Green Party calls for the establishment of global and national greenhouse gas emission reductions and effective enforcement mechanisms (2). Safeguarding our climate, for ourselves and for future generations, is a Green Party objective. The Green Party hopes to reduce the risk of disaster by keeping the global temperature rise to 2 degrees C or under, and reducing harmful carbon dioxide emissions. We need, at the very least, to get all UK greenhouse gas emissions to 10% of 1990 levels by 2030. Climate change will likely increase the number of heat-waves, floods and droughts; changes of habitat; cause water and food scarcity; and the destruction of vital national and local infrastructure.

Four main methods in our Climate Change policy join up to other Green policies such as our Energy/Forestry/Transport and Social Welfare policies, and include:

Short-sightedness and unfair trade agreements have led directly to deforestation, biodiversity loss, and faster climate change. Big polluters get the biggest permission to pollute, which is something the Green Party would tackle with carefully structured market-based mechanisms to protect our irreplaceable natural resources.

Our Personal Response to Climate Change